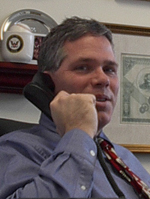 Since 2001, Eric Tolmie has serves as a financial advisor for Commonwealth Financial Network®. Eric provides individuals with a range of specialized, comprehensive financial guidance for investment, retirement, and health care planning, as well as other wealth management needs.

Eric received his MBA from the College of Saint Rose after gaining his BA in Political Science and American History from the State University of New York at Albany. He then began his career in 1989 as a financial advisor with Key Private Banking and Investments, where he worked for 11 years before deciding to work as an independent advisor.

Eric and his wife, Kristine,  have resided in Albany, New York since 1985. They have one son, Ian. Eric is a veteran of the United States Navy and has enjoyed traveling the world. He is an avid NY sports fan of baseball, football, and hockey.